We publish a report about the 30th Anniversary dinner during GA in Riga 2016.

About the true values of this organization. A personal ode to FEJS. 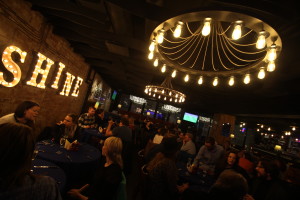 There was a boy I knew from my home town, who also studied journalism at the Faculty of Social Sciences in Ljubljana when I first started university. We met one day in October and he started talking to me about this international student organisation I should definitely get involved in. At that point I did not have much to do and I was always kind of a nerd and especially big on extra-curricular activities, so joining FEJS Slovenia made sense. It so happened that we were organising the Annual Congress in Ljubljana that year. All of a sudden, it was April 2010 and we were a part of this big thing happening, hosting 100 students and young journalists from all around Europe, holding lectures, discussions and workshops on the topic of global journalism.

I remember sitting in the hotel lobby, welcoming participants and just shyly observing what turned out to be the most genuine expressions of friendship. I was wondering, how is it possible for people to be so close, if they only see each other once or twice per year. It did not take me long to discover. And I was hooked. I went to almost every single FEJS event in the next 6 years. Matera, Dortmund, Vienna, Antwerp, Utrecht, Ljubljana again, Cologne, Vaasa, Athens, Turin, Riga. My longest relationship. In between there were two rewardingly exhausting years in which Slovenia took over the work of the Secretariat and I did this incredibly important task with my lovely friends Jasna and Vanja. Those were quite turbulent times for our FEJS careers, since we had a lot to deal with; there was some crying, but still so much more laughter that it was all worth it. Like all things in life, FEJS works by the rules of reciprocity – you give something and you gain something back. And this is the reason you want to do more, get more involved, help with whatever you feel like you have to offer. To give something back to the organisation and the people who thought you so much about journalism, European culture and life in general.

In all my years with FEJS, as well as before my time, for sure, there were intense discussions. Some of the most interesting ones I ever had. On all sorts of topics but especially media, our common interest. Journalism is a craft but it is also a way of living. And what I have seen from people in FEJS, they all live it, no matter what they actually do. This is because they are curious, informed, incredibly penetrative minds, who will question everything, search for answers and make sure to get their facts straight. And then of course, there was less serious stuff, like parties. Some of the most and least memorable I ever had. And there was romance, some swift and some lasting. But above all, there were friendships. And still there are. I met some of the most amazing people I want to keep on meeting, because every time I do, I just feel more privileged to know them.

Then there is one other important thing the organisation gravitates to and that is the idea(l) of Europe. When I think about Europe lately, I get agitated, even frustrated. Because of the bureaucrats, who are alienated from the core of what I believe to be the European ideal, the European identity. Because of the rise of populist right wing parties, thriving in almost every European country. Because of policies, which do not take a strong stand on the issues of solidarity and human rights, which I would like to think are the core of this whole European project, in internal and external matters. But then again, I also hold a completely different, not at all pessimistic view on everything European. I had the honour to meet young people, who are daily faced with prejudicial media and political discourses on Europe, but are still capable of more penetrative, critical point of view, and at the same time positive idealism, interest, compassion, solidarity, the feeling of belonging. If these were the people to lead Europe, I think to myself and indulge in a daydream of a better world …

Back in 1986 when FEJS was founded and the first meeting was held, the participants were discussing whether to invite journalism students from the Eastern block to join, as Theo Dersjant, one of the founding fathers of FEJS, told us youngsters at the celebratory 30th anniversary dinner in Riga. We are not divided by the iron curtain anymore, but still, there are new walls rising in Europe, you can see them on the ground (in a form of supposedly protective barbed wires) and sense them in people’s minds. One brick at the time, the Fortress Europe is being (re)built, haunted by the fear of enemies from outside and from within. Breaking the walls seems to be a never-ending fight in Europe and sometimes I get the feeling they are only getting higher and stronger.

But then, there is FEJS. The true meaning of cooperation, solidarity and genuine appreciation of European and other cultures is as strong as ever between young people who meet, discuss and form bonds, which can only be describe, as, well, love. Yes, that is how sentimental and poignant I get about FEJS, and I am not apologizing for it, you will get there, too.

So, how does the story end? I have no idea, but I am eager to find out. I might not go to the FEJS events as a participant anymore, but I do not want to miss out on the yearly dose of inspiration and love that FEJS kindly provided me through the years and kept me from falling victim to the negativism and unproductive cynicism, supported by stress-induced drinking and smoking, so familiar in our line of work. This is why I am sure we will continue to get together. I got to know the drive that keeps FEJS moving forward for the past thirty years and I have complete faith in it for the future. Because I see it in the faces of newbies at every event, the very same one I feel and share with my long-time friends from this organisation. I see we all get it. And this is why I am not afraid FEJS will ever fall apart, I only see it growing and the bonds becoming stronger.