We publish a report about the Lecture by Nika Aleksejeva during GA in Riga 2016.

If journalism is just about listing facts, we don’t need journalists, we need robots.
by Enja Zagorsek 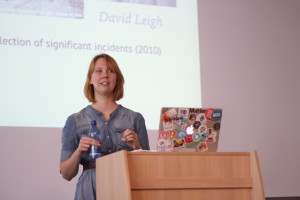 Participants at FEJS General Assembly in Riga had a workshop led by a project manager and comunicator Nika Aleksejeva. She works as an ambassador at Infogr.am, a data visualization tool for non-designers. Her task as an ambassador is »to share it with local community as a tool to present data in easy and engaging way,« as she explained.

The lecture with Nika was devided into two parts. First, participants were discussing about the importance of visual information which is processed by human brain 60,000 times faster than the textual one. »We need to visualize data whenever a data table or a data mentioned in plain text is too complicated to make sense,« said Nika about the importance of visuals. Even though some topics are too complex to be explained only trough visuals, which in this case have more complementary role, they can increase readers engagement by over 60%. As Nika said, a journalist should decide whether (s)he should present information trough graphics depending on a topic and the audience. Participants were taught about creative options of graphics and they had a chance to practice them on their own in a practical task of choosing the right graphic depending on the type of information, which offers additional information, easier understanding and is more attractive for the reader. According to Nika, this is  fundamental because even though storytellers appreciate the power of graphics, not all of them know how to use them corectly. »The most common mistake is to use a pie chart with more than three categories,« she added.

The second part of the workshop at the FEJS General Assembly was dedicated to storytelling, about which Nika is passionate. »Storytelling is a tool and an art to pass on narratives. Narratives are what we communicate everyday. A skill to pass on stories in engaging way is like a super power in my opinion, therefore I work to develop it,« she replied on a question why she would feel so passionate about storytelling. As the human brain differs between rational, emotional and social relevance the journalist should try to reach at least the first two. As Nika explained »If the rational aspect is not reached you do not believe it and without the emotional relevance you do not care«. She thinks journalists should have in mind five basic emotions, quote and not just report, and through that reach more people and even change things in society. »Every story has a message that triggers some emotions for a certain audience. There are winners and losers in every “game”. I do not say that journalists should put their particular attitude or emotions in the story, what I say is that journalists need to keep in mind what emotions their story will trigger for a political party member, for a family, for taxi drives … .« Even though some professionals believe that a journalist’s priority should be obejctive and neutral reporting, Nika says she does not believe in objectivity, because there always exist too many views and attitudes on the same things. »I believe in professional, targeted message that qualifies for good journalism standards. Journalists have a power to turn a simple message in an exciting story, that involves all the heroes involved in it – good guys, bad guys, decision makers, regulars. If it’s just about listing facts, we don’t need journalists, we need robots.«

A good journalist needs to do more than just report. What makes a journalist a good journalist is, as Nika says, »analytical mind, critical thinking, empty and good self reflection; ability to see the whole picture out of details«. A journalist will be successful by offering content that is: simple, unexpected, concrete, emotional, shareable and including a Story.